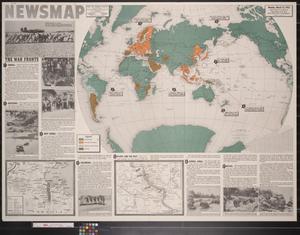 Inset maps show northern Tunisia, and along the Russian front.

Back: Military Courtesy. Color illustrations of Army and Navy uniforms and insignia of the United States, U.S.S.R., France, Poland, China and the British Empire. Accompanying text describes how to address each rank.