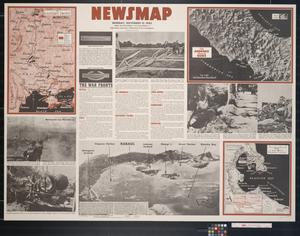 Photographs: Moving into Lae, New Guinea; Jap bases in the South and Southwest Pacific; Rocket glider used against Allied ships during the invasion of Italy; Germans trying to hold up the advance of the Allied Fifth Army on the Naples-Benevento Road fastened these aerial bombs to notched trees; Italian bombs unloaded from a rail car at an airfield captured in Italy.

Back: U.S. Army ribbons representing decorations and awards. Includes a large color illustration of the Medal of Honor.