One of 902 articles in the title: Journal of Near-Death Studies available on this site. 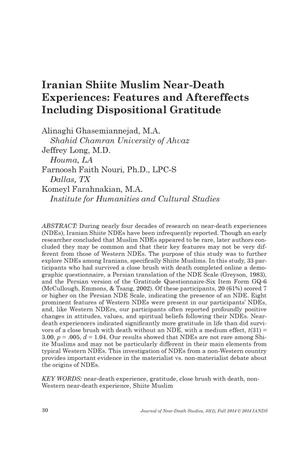 Article describing research to explore the near-death experiences (NDEs) of Iranian Shiite Muslim experiencers. It outlines the methods and results of the study and explains how the experiences compare to those of Western experiencers.

Article describing research to explore the near-death experiences (NDEs) of Iranian Shiite Muslim experiencers. It outlines the methods and results of the study and explains how the experiences compare to those of Western experiencers.

"[The Journal of Near-Death Studies] is the only peer-reviewed scholarly journal (ISSN 0891-4494) devoted exclusively to the field of near-death studies. It is cross-disciplinary and published quarterly."

Pagination is continuous through volumes.

Abstract: During nearly four decades of research on near-death experiences (NDEs), Iranian Shiite NDEs have been infrequently reported. Though an early researcher concluded that Muslim NDEs appeared to be rare, later authors concluded they may be common and that their key features may not be very different from those of Western NDEs. The purpose of this study was to further explore NDEs among Iranians, specifically Shiite Muslims. In this study, 33 participants who had survived a close brush with death completed online a demographic questionnaire, a Persian translation of the NDE Scale (Greyson, 1983), and the Persian version of the Gratitude Questionnaire-Six Item Form GQ-6 (McCullough, Emmons, & Tsang, 2002). Of these participants, 20 (61%) scored 7 or higher on the Persian NDE Scale, indicating the presence of an NDE. Eight prominent features of Western NDEs were present in our participants' NDEs, and like Western NDErs, our participants often reported profoundly positive changes in attitudes, values, and spiritual beliefs following their NDEs. Near-death experiencers indicated significantly more gratitude in life than did survivors of a close brush with death without an NDE, with a medium effect, t(31)=3.00, p=.005, d=1.04. Our results showed that NDEs are not rare among Shitte Muslims and may not be particularly different in their main elements from typical Western NDEs. This investigation of NDEs from a non-Western country provides important evidence in the materialist vs. non-materialist debate about the origins of NDEs.

The Journal of Near-Death Studies is a scholarly peer-reviewed journal devoted to the field of near-death studies. It is published on a quarterly basis by the International Association for Near-Death Studies. The Journal began publication in 1982 under the name Anabiosis which was changed to its current title in 1986 with the start of Volume 6.