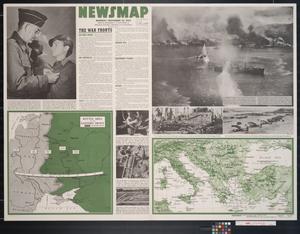 Photographs: Capt. Herman Bottcher of San Francisco receives the Distinguished Service Cross from Maj. Gen. W. H. Gill; British Eighth Army Tommy sets up quarters in an empty wine barrel with a pillow and bedspread near the Termoli front in Italy; Three Yanks look over a 32 cm. incendiary rocket captured in Sicily; Correction printed under photo appearing in the previous Newsmap shows rocket is an experimental model tested several years before; Army B-25 swings in low over a burning Japanese ship on Nov. 2 attack in Rabaul; Japanese machine gun emplacement on the Kula Gulf side of Kolombangara Island; Grumman Avengers and Hellcats line up on the improved Munda airstrip.

Back: The world a polar projection, with modified extensions interrupted for southern Hemisphere: "This world map is designed to show the relative positions of land areas for air connections to the principal theaters of operations."