We would like to reproduce as many as
possible in a future issue of MBN. Therefore,
if you haven't already, how about
shipping us a sample or two of your bookplate
production so that this can be included.
Also, any comments or other information
from our readers regarding this
subject or bookplates of others in past
years would be welcome and of interest to
other readers.
MINI-BOOKS
We have recently tracked down fifteen
little teenies to whet collectors' appetites.
Published in Chicago in 1965 and 1966,
they are actually children's toy items.
Bright and differently colored cardboard
covers, with rubberized spines, each consists
of forty-eight pages, illustrated, with
puns and anagrams in some, comic book
tales in others.
Size of each is just 7/8 by 5/8 inches.
Their titles are:
TINY TALES (three different books)
FIBS 'N SQUIBS (three different books)
SILLY WILLIES
LITTLE KIP COMICS
MONSTER LAFFS
THE INCREDIBLE HULK
CAPTAIN AMERICA
MILLIE THE MODEL
THE AMAZING SPIDERMAN
THE MIGHTY THOR
SARGEANT NICK FURY
T\MJs
1 TAIA*^ / \^~0 E

'I S Turtles
I'll Be Move So
Around In Slowly?
An H

Sets of all fifteen of these different minibooks
can be obtained for $1.85 per set,
postpaid, by sending check to MBN.
SCRIVENER OF THE LXIVmos
(CONTINUED)
In the last issue of MBN, we reprinted
part one of James D. Henderson's short
treatise: "Miniature Books". Henderson
was a fervent microbibliophile and editor
(i.e. scrivener) of the 1927-9 NEWSLETTERS
OF THE LXIVmos, forerunner
of the present MBN. Herewith, part two
(of three):
MINIATURE BOOKS
I searched New York and Philadelphia,
and then I went to Detroit, still on
route to Battle Creek but did not succeed
in finding little books, but by that time I
had so far forgotten the primarycause of
my trip that I started homeward, cured of
tired nerves but determined to advance myself
in the hobby of collecting miniature
books.
But now, you ask just why a great
big, grown-up man spends his time gathering
and collecting wee, little defenseless
and unassuming miniature books. Well,
why collect anything? Some men collect
absolutely worthless, cancelled, perforated,
lacerated postage stamps which
have long since served their usefulness
in conveying words of sweet nothing from
some heartsick swain to a coquettish
young miss, or a stamp which has adorned
some envelope in which were penned those
disagreeable and unwelcome words,
"Please remit." Boys collect fish hooks,
pieces of string and marbles. Grown-up
ladies collect dolls and dress them as a
record of clothing of other days.
Then again, the diminutive has always
had its appeal. We have always
spoken affectionately of the smaller creations.
We are always tolerant of the mistakes
of little children and we always admire
the craftsman who can re-produce the
larger product of his hands in miniature.
And so in the creation of miniature books,
here have been combined the skill of the
printer, the type-maker, the illustrator,
the book-binder, the electro-typer and the
photographer; but it is not to the craftsman's
skill alone that we pay tribute to
the miniature book for they serve not only
as an adornment of some dusty trinket
cabinet but have served as the primary
basis of education and interest for many
a tot in the centuries gone by.
In those days books were large and
ponderous and their content was entirely
religious in its nature. There were not so
many diversions for the little ones and so
7 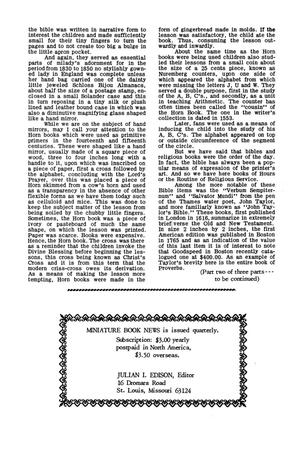