DAILY FOOD
Religious and devotional books of all
types have enjoyed a vogue for miniature
format over the centuries. Even today,
tiny bibles and prayer books are still being
produced in many languages.
The nineteenth century saw an outpouring
of such works in a variety of catagories---bible
text books, hymn books,
moral preachments, books of solitude and
meditation, etc. One of the most voluminous
and many-editioned miniature
religious books of this era was the DAILY
FOOD FOR CHRISTIANS. The full title
page is reproduced below.
DAILY FOOD
FOR
i CHRISTIANS; I

BEING
A PROMISE, AND ANOTHER SCRIPTURAL
PORTION,
FOI
EVERY DAY IN THE YEAR:
TOGETHER
WITH THE VERSE OF A HYMN.
I have esteemed the words of his mouth more
than my necessary food. Jon 23:12.
Man doth not live by bread only, but by every
word that proceedeth out of the mouth of the Lord
doth man live. DKUT. 8:3; MATT. 4:4.
PUBLISHED BY THE
AMERICAN TRACT SOCIETY,
160 NASSAU-STREET, NEW YORK.

Title page actual size.
DAILY FOOD was first published by
the Religious Tract Society of London,
about 1830, an organization which had been
launched from the London Missionary Society
in 1799 to publish and sell religious

tracts cheaply. The American Tract Society
was founded in 1825 for the same purpose,
and about 1830 also published its DAILY
FOOD, an exact duplicate of an early London
edition.
An American edition of DAILY FOOD,
that probably came after the first American
Tract Society one, was published in Boston
by Perkins and Marvin and dated 1831,
although the title page states: "lst American,
from the 8th London edition." Copies
published by both societies are not dated.
The identical DAILY FOOD text was still
being published at least as late as 1895
in England, because we have a copy with
a slightly different title page only, as follows:
DAILY FOOD FOR THE BOYS AND
GIRLS CHRISTIAN BAND OF CAMBRIDGE,
J. S. Paine, Supt., November 1,
1894... And we have an American copy as
late as 1898, published by H. S. Elliott in
Chicago, and printed by the well-known
firm of R. R. Donnelley and Sons.
The American DAILY FOOD was undoubtedly
reprinted many times by the
American Tract Society, as well as by
several other firms. Almost all issues
have 192 pages (though not every issue is
paginated), and the size varied slightly
from between 3 to 3 3/16 inches in height
by 2 1/2 inches in width. Copies were
usually bound in cloth boards, blind and
gilt stamped, in various colors, and gilt
edges.
As the title suggests, the book is divided
into twelve monthly chapters. For
each numbered day of every month there
are two quotations from the bible, in between
which are four or six lines of a different
verse of a hymn.
DAILY FOOD was also printed and
published by other American firms, and
listed below are some of the American 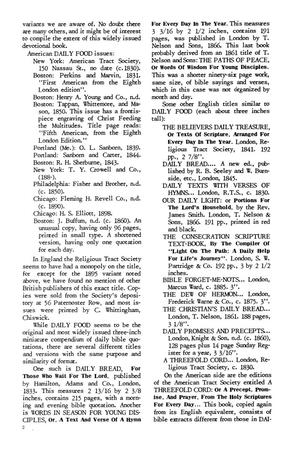 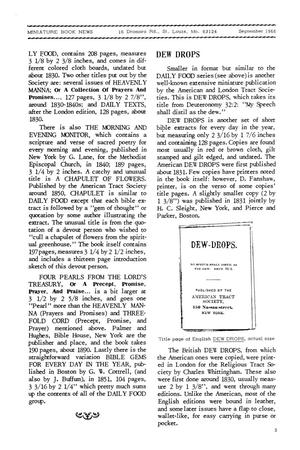 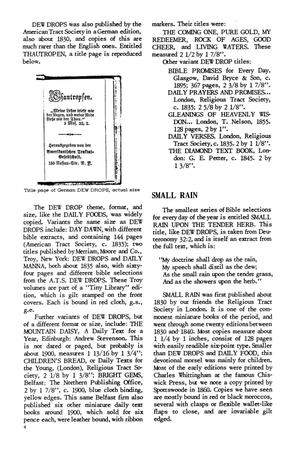 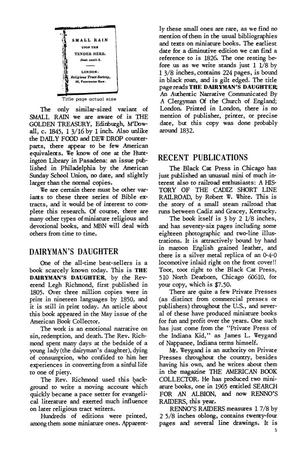