Newsmap. For the Armed Forces. 233rd week of the war, 115th week of U.S. participation 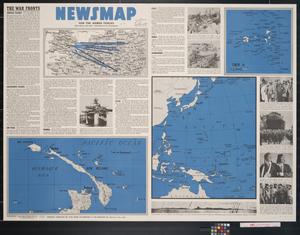 Back: Text states "In Mein Kampf, Hitler stated that his plan was to destroy France first, then England, after which he would have the United States cornered without a fight!."