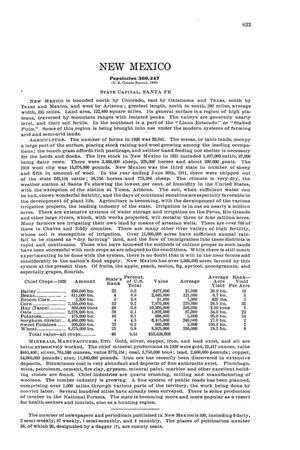 This book is part of the collection entitled: Newspaper Resources and was provided by the UNT Libraries to the UNT Digital Library, a digital repository hosted by the UNT Libraries. It has been viewed 2829 times, with 8 in the last month. More information about this book can be viewed below.

Full title on title page: "N. W. Ayer & Son's American Newspaper Annual and Directory, a Catalogue of American Newspapers, a carefully prepared list of all newspapers and periodicals published in the United States, Territories, and Dominion of Canada, Cuba and the West Indian Islands, with valuable information regarding their circulation, issue, date of establishment, political or other distinctive features, names of editors and publishers, and street addresses in cities of fifty thousand inhabitants and upward, together with the population of the counties and places in which the papers are published. A separate list of all daily newspapers in the United States and its posessions and the Dominion of Canada which are published throughout the year, indicating by distinguishing marks those which issue Weekly or Sunday editions. Lists of monthly and weekly publications of general circulation, religious and agricultural publications, the various trade, technical and class publications, newspapers printed in foreign languages, co-operative newspaper lists, etc. A list of religious, agricultural, trade, technical and class publications, magazines and reviews, etc. arranged in alphabetical order by their names, the place of publication of each being shown. A Description of every place in the United States and Canada in which a newspaper is published, including railroad, telegraph, express and banking facilities; also state, territory or province, giving location, character of surface and soil, chief products and manufacturers, forming a valuable guide to the judicious placing of any line of advertising. Ninety-seven maps of the United States and its posessions, the Canadian Provinces and the West Indian Islands, etc., carefully revised and corrected to date."
"Copyright, 1922, by N.W. Ayer & Son."