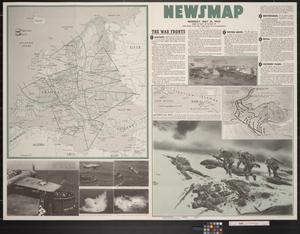 Front: Text describes action on various war fronts: Aleutians, Western Europe, Mediterranean, Russia, Southwest Pacific. Map: Shows military activity in western Europe during the week of May 10 to May 27, 1943. Inset maps: Aleutians, Present fighting area in Attu. Photographs: Images of a Grumman "Wildcat" fighter plane taken from the escort carrier, U.S.S. Altamaha. Illustration: Advance on Attu. Back: You can crack that tank! Text and illustrations show how an infantryman can defend against an enemy tank.

Back: You can crack that tank! Text and illustrations show how an infantryman can defend against an enemy tank.

"Prepared from public sources of information"