Newsmap. For the Armed Forces. 256th week of the war, 138th week of U.S. participation 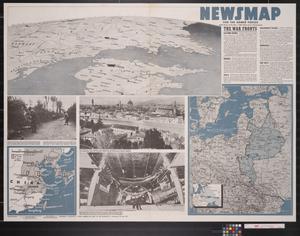 Maps: North Sea, English Channel, and Bay of Biscay with surrounding countries as viewed from England. Japanese targets hit by B-20s 15 June, 7 July, and 29 July. Current battle line between Poland and the U.S.S.R. Distance map between Stalingrad and Warsaw.

Photographs: U.S. soldiers move warily toward hedgerows in the fields of Normandy; View of Florence, Italy from the Piazzole Michaelango showing the Arno River, Palazzo Vecchio and the cathedral; Underbelly view of the B-29 Superfortress.

Back: Text and illustrations highlight the responsibilities of the Navy's Amphibious Forces. Includes insignia and list of battles.