Newsmap. For the Armed Forces. 242nd week of the war, 124th week of U.S. participation 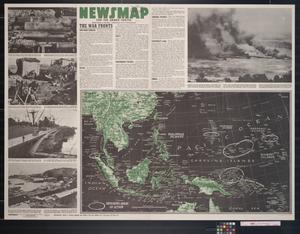 Includes photographs: Various sizes of bombs; German self-propelled gun with an American tank and a Nazi armored personnel carrier in the background; Capsized liberty ship in Naples harbor; View of Sabang Harbour before being taken by Japanese; Allied planes carry out some of the heaviest bombing operations at Hollandia airfield.

Back:
Memorandum for the Armed Forces. Subject: Home front production.