Newsmap. For the Armed Forces. 267th week of the war, 149th week of U.S. participation 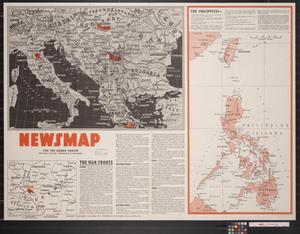 Back: Large map of the United States and adjoining portions of Canada and Mexico. Includes inset map of naval districts beyond the continental United States, population of the states, sixteenth census, 1940.