One of 6 reports in the title: Activities to Support Establishment of a Sea Floor Monitoring Station Project Progress Report available on this site. 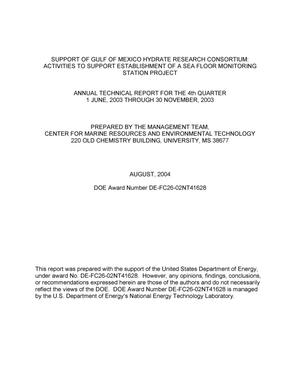 A Consortium, designed to assemble leaders in gas hydrates research, has been established at the University of Mississippi's Center for Marine Resources and Environmental Technology, CMRET. The primary objective of the group is to design and emplace a remote monitoring station on the sea floor in the northern Gulf of Mexico by the year 2005, in an area where gas hydrates are known to be present at, or just below, the sea floor. This mission necessitates assembling a station that will monitor physical and chemical parameters of the sea water and sea floor sediments on a more-or-less continuous basis over … continued below

People and organizations associated with either the creation of this report or its content.

Descriptive information to help identify this report. Follow the links below to find similar items on the Digital Library.

A Consortium, designed to assemble leaders in gas hydrates research, has been established at the University of Mississippi's Center for Marine Resources and Environmental Technology, CMRET. The primary objective of the group is to design and emplace a remote monitoring station on the sea floor in the northern Gulf of Mexico by the year 2005, in an area where gas hydrates are known to be present at, or just below, the sea floor. This mission necessitates assembling a station that will monitor physical and chemical parameters of the sea water and sea floor sediments on a more-or-less continuous basis over an extended period of time. Development of the station allows for the possibility of expanding its capabilities to include biological monitoring, as a means of assessing environmental health. Establishment of the Consortium has succeeded in fulfilling the critical need to coordinate activities, avoid redundancies and communicate effectively among researchers in this relatively new research arena. Complementary expertise, both scientific and technical, has been assembled to innovate research methods and construct necessary instrumentation. A year into the life of this cooperative agreement, we note the following achievements: (1) Progress on the vertical line array (VLA) of sensors: (A) Software and hardware upgrades to the data logger for the prototype vertical line array, including enhanced programmable gains, increased sampling rates, improved surface communications, (B) Cabling upgrade to allow installation of positioning sensors, (C) Adaptation of SDI's Angulate program to use acoustic slant ranges and DGPS data to compute and map the bottom location of the vertical array, (D) Progress in T''0'' delay and timing issues for improved control in data recording, (E) Successful deployment and recovery of the VLA twice during an October, 2003 cruise, once in 830m water, once in 1305m water, (F) Data collection and recovery from the DATS data logger, (G) Sufficient energy supply and normal functioning of the pressure compensated battery even following recharge after the first deployment, (H) Survival of the acoustic modem following both deployments though it was found to have developed a slow leak through the transducer following the second deployment due, presumably, to deployment in excess of 300m beyond its rating. (2) Progress on the Sea Floor Probe: (A) The Sea Floor Probe and its delivery system, the Multipurpose sled have been completed, (B) The probe has been modified to penetrate the &lt;1m blanket of hemipelagic ooze at the water/sea floor interface to provide the necessary coupling of the accelerometer with the denser underlying sediments, (C) The MPS has been adapted to serve as an energy source for both p- and s-wave studies at the station as well as to deploy the horizontal line arrays and the SFP. (3) Progress on the Electromagnetic Bubble Detector and Counter: (A) Components for the prototype have been assembled, including a dedicated microcomputer to control power, readout and logging of the data, all at an acceptable speed, (B) The prototype has been constructed and preliminary data collected, (C) The construction of the field system is underway. (4) Progress on the Acoustic Systems for Monitoring Gas Hydrates: (A) Video recordings of bubbles emitted from a seep in Mississippi Canyon have been made from a submersible dive and the bubbles analyzed with respect to their size, number, and rise rate. These measurements have been used to determine the parameters to build the system capable of measuring gas escaping at the site of the monitoring station, (B) Laboratory tests performed using the project prototype have produced a conductivity data set that is being used to refine parameters of the field model. (5) Progress on the Mid-Infrared Sensor for Continuous Methane Monitoring: (A) Preliminary designs of mounting pieces for electrical components of ''sphereIR'' have been completed using AutoCAD software, (B) The preliminary design of an electronics baseplate has been completed and aided in the optimization of positioning electrical components inside the instrument housing, (C) First spectroscopic investigations of the highly permeable polymer, poly(trimethylsilyl)propyne (PTMSP), as a potential sensing membrane for methane, have commenced, (D) High-pressure multireflection ATR measurements were continued during this project period to investigate the potential influences of hydrostatic pressure on sensing principles and data evaluation strategies. (6) Progress on the Seismo-acoustic Characterization of Sea Floor Properties and Processes at the Hydrate Monitoring Station: (A) work has concentrated on the design and building of the hardware, bench testing and preliminary field trials, (B) development work to extend the capability of the electronics to allow remote operation on the seabed for up to 3 months at a time done.

Unique identifying numbers for this report in the Digital Library or other systems.

This report is part of the following collection of related materials.

Reports, articles and other documents harvested from the Office of Scientific and Technical Information.

Office of Scientific and Technical Information (OSTI) is the Department of Energy (DOE) office that collects, preserves, and disseminates DOE-sponsored research and development (R&D) results that are the outcomes of R&D projects or other funded activities at DOE labs and facilities nationwide and grantees at universities and other institutions.

What responsibilities do I have when using this report?

Dates and time periods associated with this report.

When was this report last used?

Interact With This Report