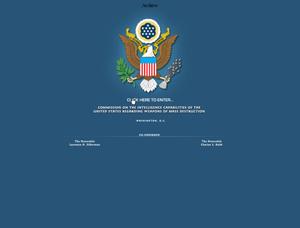 Established by Executive Order 13328 and signed by President George W. Bush on February 6, 2004, the Commission was charged with assessing whether the Intelligence Community is sufficiently authorized, organized, equipped, trained, and resourced to identify and warn in a timely manner of, and to support United States Government efforts to respond to, the development and transfer of knowledge, expertise, technologies, materials, and resources associated with the proliferation of Weapons of Mass Destruction, related means of delivery, and other related threats of the 21st Century and their employment by foreign powers (including terrorists, terrorist organizations, and private networks). T he ... continued below

Commission on the Intelligence Capabilities of the United States Regarding Weapons of Mass Destruction May 24, 2004.

This website is part of the collection entitled: CyberCemetery and was provided by UNT Libraries Government Documents Department to UNT Digital Library, a digital repository hosted by the UNT Libraries. It has been viewed 323 times. More information about this site can be viewed below.

Descriptive information to help identify this website. Follow the links below to find similar items on the Digital Library.

Unique identifying numbers for this site in the Digital Library or other systems.

This site is part of the following collection of related materials.

The CyberCemetery provides permanent public access to the web sites and publications of defunct U.S. government agencies and commissions. This collection is provided through a partnership between the UNT Libraries, the U.S. Government Printing Office (GPO), and the National Archives and Records Administration (NARA), as part of the Federal Depository Library Program.

What responsibilities do I have when using this website?

When was this site last used?

Citing This Site Responsibilities of Use Licensing & Permissions Linking & Embedding Copies & Reproductions
Back to Top of Screen
This link will take you to a site outside the Digital Library.