The Power of One Reinforcer 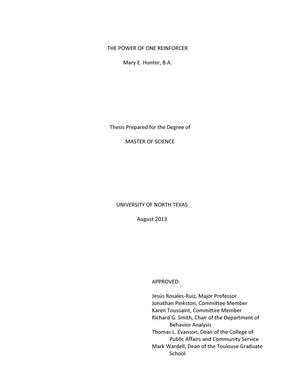 Animal trainers use shaping to teach many behaviors. However, during shaping, the organism may engage in behaviors other than the target behavior or approximations to the target behavior. If the animal is engaged in other behaviors, the rate of reinforcement may decrease and the trainer may resort to what is sometimes referred to as a “desperation click.” That is, the trainer delivers one reinforcer for a behavior that is not a successive approximation to the target response. Anecdotal reports from trainers suggest that sometimes the animal continues to repeat this other behavior that received only one reinforcer, even in the … continued below

People and organizations associated with either the creation of this thesis or its content.

Descriptive information to help identify this thesis. Follow the links below to find similar items on the Digital Library.

Unique identifying numbers for this thesis in the Digital Library or other systems.

This thesis is part of the following collection of related materials.

What responsibilities do I have when using this thesis?

Dates and time periods associated with this thesis.

When was this thesis last used?

Interact With This Thesis