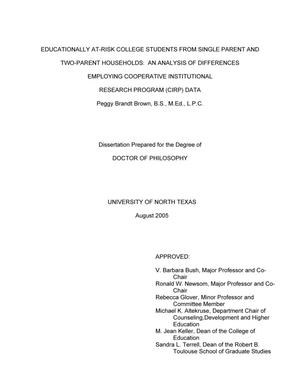 Using factors of low income, parents' levels of education, and family composition as determinants of educationally at-risk status, study investigated differences between first generation, undergraduate college students from families in lowest quintile of income in the U.S, One group consisted of students from single-parent households and the other of students from two-parent households. Data were from CIRP 2003 College Student Survey (CSS) and its matched data from the Freshman Survey (Student Information Form - SIF). Differences examined included student inputs, involvements, outcomes, and collegiate environments. Included is portrait of low income, first generation college students who successfully navigated U.S. higher … continued below