College Student Identity and Attitudes Toward Gays and Lesbians 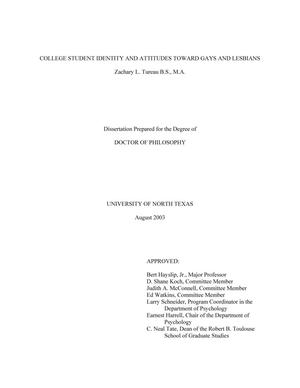 Showing 1-4 of 75 pages in this dissertation.

This study investigates the relationship between an individual's attitude toward gay men and lesbians and their identity development. The sample included 440 undergraduates from a university in the northeast Texas area. Many, if not all, of the factors that are associated with negative attitudes toward gays and lesbians (i.e., restrictive gender-role attitudes, high levels of authoritarianism, perceptions of negative attitudes toward homosexuals within their peer group, little or no contact with homosexuals, and conservative religious ideologies) have a logical relation to identity development. Furthermore, the various functions that attitudes toward gays and lesbians can serve (e.g., value-expression, group membership) were … continued below