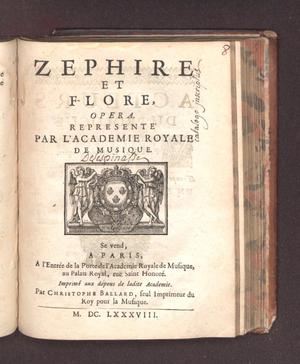 This is a digital reproduction of the 1688 libretto of the opera "Zephire et Flore" by Michel Du Boullay. The music of the opera is attributed to Louis and Jean-Louis Lully, sons of Jean-Baptiste Lully. It was performed for the first time on March 22, 1688 at the Palais Royale in Paris.

This book is part of the collection entitled: Virtual Music Rare Book Room and was provided by the UNT Music Library to the UNT Digital Library, a digital repository hosted by the UNT Libraries. It has been viewed 460 times. More information about this book can be viewed below.

We've identified this book as a primary source within our collections. Researchers, educators, and students may find this book useful in their work.

The UNT Music Library supports the scholarly and performance research needs of the College of Music by collecting and preserving monographs, reference works, periodicals, printed music, and sound recording formats, as well as subscribing to electronic databases for research and streaming music. Special collections are a particular strength of the Music Library's holdings.

This is a digital reproduction of the 1688 libretto of the opera "Zephire et Flore" by Michel Du Boullay. The music of the opera is attributed to Louis and Jean-Louis Lully, sons of Jean-Baptiste Lully. It was performed for the first time on March 22, 1688 at the Palais Royale in Paris.

The plot, which Du Boullay based on Greek mythology, starts with Borée's lamenting not having won over Flore's love. When Zephire, his rival, enters and speaks aloud of his secret love for Flore, a confrontation ensues between both suitors and Cloris interrupts the heated dispute. Borée asserts that Flore cannot love Zephire, and asks that they call on Cybele to mediate the situation.

Flore appears after Borée departs and reassures Zephire that she knows his love is a thousand times stronger than Borée's. Meanwhile, Clytie, who is in love with the Sun, thinks Flore is her rival and because of her jealousy, the Sun chastises and banishes her. Flore is told to seek refuge in the forest. Zephire is told to take to the skies and learn the ways of the gods if he is to achieve his goal of having Flore.

Banished in a forest, Clytie is outraged blaming her situation to the Sun's loving Flore. A celebration passes by and Borée tells the celebrants of his long search for Flore, whom he loves. Clytie, who has been hiding throughout Borée's discourse, reveals herself. The two rejected lovers find they have much in common and Borée carries Clytie to Thrace in order to execute their vengeance.

Borée, who abducted Flore into a cave, bids her to look at the vastness of his empire which he is willing to give to her if she accepts him as her lover. Flore pretends to soften in order to escape, but Borée recognizes her duplicity and chastises her. Clytie enters and accuses Flore of stealing the Sun away from her and reveals she is there to exact her revenge. Flore assures Clytie that she loves Zephire, not the Sun. And as Zephire enters to informs Flore that Jupiter approved of their love, Clytie, realizes her mistake and cries out for death to alleviate her embarrassing suffering. While Zephire and Flore sing of their love, Borée tries to destroy Zephire, but the Sun intercedes and tells Zephire and Flore that Jupiter will transport them away to protect them from Borée. Flore asks Zephire if his heart will accept her now, though she did not accept him before. Zephire answers yes and they swear eternal allegiance to each other.