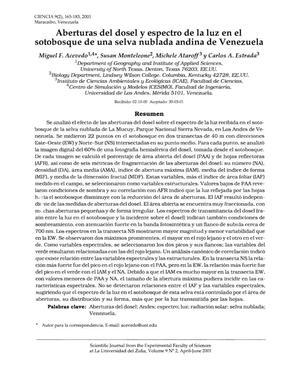 This article is part of the collection entitled: UNT Scholarly Works and was provided by the UNT College of Engineering to the UNT Digital Library, a digital repository hosted by the UNT Libraries. It has been viewed 415 times. More information about this article can be viewed below.

The UNT College of Engineering strives to educate and train engineers and technologists who have the vision to recognize and solve the problems of society. The college comprises six degree-granting departments of instruction and research.

Abstract: The effect of canopy gaps on the spectral characteristics of light received by the understory of a cloud forest was studied at La Mucuy, Sierra Nevada National Park, in the Venezuelan Andes. Measurements were taken at 22 points along two 40m transects oriented in the east-west (EW) and north-south (NS) directions and that intersected at the middle. For each point, a digital image of 60% of the area of a hemispherical photograph was analyzed calculating the percent of gap area (PAA) and reflecting foliage (AFR), as well as six canopy gaps fragmentation metrics. These metrics were: number of gaps (NA), gap density (DA), mean area of gaps (AMA), largest gap index (IAM), mean shape index (MIF) and mean fractal dimension (MDF). These variables, in addition to leaf area index (IAF) measured in the field, were selected as variables to represent canopy structure. Low values of PAA revealed shaded conditions; its correlation with AFR indicated that light reflected by the foliage towards the understory decreased with a reduction in gap area. The IAF resulted independent of the other structural variables. The area in gaps was found to be highly fragmented in many small and irregularly shaped gaps. Canopy transmittance (ratio of understory over incident light) spectra indicated shaded conditions with strong attenuation in the photosynthetic range and a steep slope near 700 nm. The spectra taken along the NS transect showed a larger magnitude and lower variability than in the EW transect. Two prominent peaks were observed and found to be correlated, one in the far red and another in the green. These two peaks and their corresponding slopes were selected to represent spectral characteristics. A canonical correlation analysis indicated a relationship between the structural and spectral variables. In the NS transect the strongest relation was for the peak in the far red with PAA, but in the EW transect, the strongest relation was for the peak in the green with IAM and NA. Since IAM is very large in the EW transect, with low PAA and NA, the size of the largest gap may affect the understory spectral characteristics. No relationship was found between IAF and the spectral variables, suggesting that the understory light spectrum in this forest site is controlled by the area in gaps, its size distribution and shape, rather than by light transmitted through the foliage.

Materials from the UNT community's research, creative, and scholarly activities and UNT's Open Access Repository. Access to some items in this collection may be restricted.