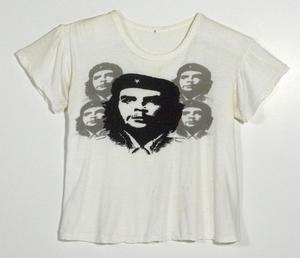 T-shirt of white cotton, having short sleeves and a rounded neckline, which is printed with an artistic rendering of a portrait of Che Guevara, arranged as large main central portrait in black, surrounded by four smaller renditions in pale gray. Acquired by the donor in Mexico City in 1971 from a vendor in the Mexico City Metro. Ernesto "Che" Guevara (b. June 14, 1928 in Rosario, Argentina - d. La Higuera, Bolivia, October 9, 1967) commonly known as El Che or simply Che, was an Argentine Marxist revolutionary, physician, author, intellectual, guerrilla leader, diplomat, military theorist, and major figure of … continued below

This physical object is part of the collection entitled: Texas Fashion Collection and was provided by the UNT College of Visual Arts + Design to the UNT Digital Library, a digital repository hosted by the UNT Libraries. It has been viewed 286 times. More information about this object can be viewed below.

People and organizations associated with either the creation of this physical object or its content.

Person who is significant in some way to the content of this physical object. Additional names may appear in Subjects below.

We've identified this physical object as a primary source within our collections. Researchers, educators, and students may find this object useful in their work.

The UNT College of Visual Arts and Design fosters creative futures for its diverse student population and the region through rigorous arts-based education, arts- and client-based studio practice, scholarship, and research. One of the most comprehensive visual arts schools in the nation, the college includes many nationally and regionally ranked programs.

Descriptive information to help identify this physical object. Follow the links below to find similar items on the Digital Library.

T-shirt of white cotton, having short sleeves and a rounded neckline, which is printed with an artistic rendering of a portrait of Che Guevara, arranged as large main central portrait in black, surrounded by four smaller renditions in pale gray.

Unique identifying numbers for this object in the Digital Library or other systems.

This object is part of the following collection of related materials.

The UNT Texas Fashion Collection is dedicated to the preservation and documentation of historically significant fashion, and serves as an educational and inspirational resource for students, researchers, and the general public. This vital resource is part of the UNT College of Visual Arts + Design.

What responsibilities do I have when using this physical object?

Dates and time periods associated with this physical object.

When was this object last used?

Geographical information about where this physical object originated or about its content.

Interact With This Physical Object