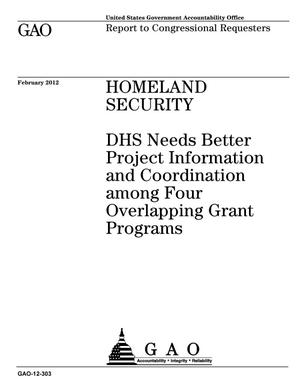 People and organizations associated with either the creation of this report or its content.

Descriptive information to help identify this report. Follow the links below to find similar items on the Digital Library.

A letter report issued by the Government Accountability Office with an abstract that begins "Multiple factors contribute to the risk of duplication among four FEMA grant programs that GAO studiedthe State Homeland Security Program (SHSP), Urban Areas Security Initiative (UASI), Port Security Grant Program, and Transit Security Grant Program. Specifically, these programs share similar goals, fund similar projects, and provide funds in the same geographic regions. Further, DHSs ability to track grant funding, specific funding recipients, and funding purposes varies among the programs, giving FEMA less visibility over some grant programs. Finally, DHSs award process for some programs bases decisions on high-level, rather than specific, project information. Although GAOs analysis identified no cases of duplication among a sample of grant projects, the above factors collectively put FEMA at risk of funding duplicative projects. FEMA officials stated that there is a trade-off between enhancing management visibility and reducing administrative burden, but also recogized that FEMA should use more specific project-level information for award decisions and have taken initial steps towards this goal. For example, FEMA is considering how to better use existing grant information and has also begun to phase in a grants management system that includes an explicit goal of collecting project-level information. However, FEMA has not determined all of its specific data requirements. As FEMA determines these requirements, it will be important to collect the level of information needed to compare projects across grant programs. Given the limitations in currently collected information, FEMA would benefit from collecting information with greater detail as this could help FEMA better position itself to assess applications and ensure that it is using its resources effectively."

Unique identifying numbers for this report in the Digital Library or other systems.

This report is part of the following collection of related materials.

What responsibilities do I have when using this report?

Dates and time periods associated with this report.

When was this report last used?

Geographical information about where this report originated or about its content.

Interact With This Report