Masculine Gender Role Conflict and Psychological Well- Being: A Comparative Study of Heterosexual and Gay Men 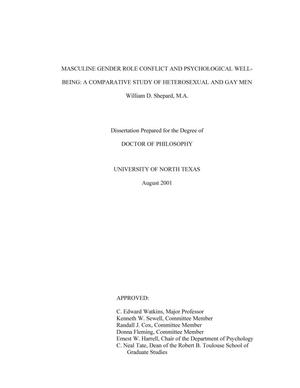 Showing 1-4 of 82 pages in this dissertation.

Masculine gender role conflict (MGRC) occurs when externally-imposed male gender role expectations have a negative impact on and consequences for men. The purpose of this study was to examine how men in a homogeneous setting (i.e., a college campus) compare on MGRC and psychological well-being, based on their self-identified sexual orientation. Utilizing canonical correlation analysis, 96 heterosexual men and 102 gay men were compared on four factors of MGRC (conflict between work and family, restrictive emotionality, restrictive affectionate behavior between men, and success, power, and competition) and five factors of psychological well-being (anger, anxiety, depression, self-esteem, and attitudes toward seeking … continued below