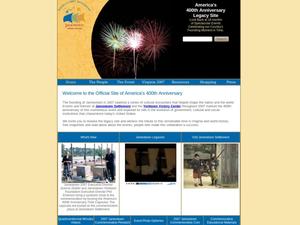 This website is part of the collection entitled: CyberCemetery and was provided by the UNT Libraries Digital Projects Unit to the UNT Digital Library, a digital repository hosted by the UNT Libraries. It has been viewed 457 times, with 8 in the last month. More information about this site can be viewed below.

The Digital Projects Unit supports the UNT Libraries with guidance and digital services including imaging, archival storage of electronic files, metadata development, web archiving, and other activities as needed.

Descriptive information to help identify this website. Follow the links below to find similar items on the Digital Library.

This website is for the commemoration of the 400th anniversary of the settling of Jamestown, Virginia, in 1607. Jamestown 2007, an agency of the Commonwealth of Virginia, worked with local, state and national groups to stage the commemoration of America’s 400th Anniversary. The commemoration began in May 2006 and continued through 2007 with a series of national and international signature events commemorating aspects of the Jamestown story. Some of the events included were the 2006 Godspeed Sail, the Virginia Indian Conference, the 225th Anniversary of the Victory at Yorktown, the Jamestown Live! webcast, the Jamestown: 400 Years in Retrospect panel, and America's Anniversary Weekend. The website contains recaps of all the events that took place during the celebration, photo galleries, press releases, published reports on all the events, and other additional resources.

Unique identifying numbers for this site in the Digital Library or other systems.

This site is part of the following collection of related materials.

The CyberCemetery provides permanent public access to the web sites and publications of defunct U.S. government agencies and commissions. This collection is provided through a partnership between the UNT Libraries, the U.S. Government Printing Office (GPO), and the National Archives and Records Administration (NARA), as part of the Federal Depository Library Program.

What responsibilities do I have when using this website?

When was this site last used?

Citing This Site Responsibilities of Use Licensing & Permissions Linking & Embedding Copies & Reproductions
Back to Top of Screen
This link will take you to a site outside the Digital Library.