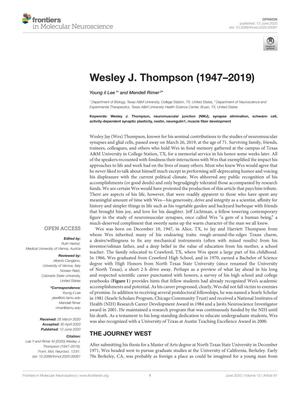 The article is a memorial to Wesley J. Thompson (1947-2019) and highlights his contributions to the studies of neuromuscular synapses and glial cells. Thompson graduated from North Texas State University (now University of North Texas) with Bachelor of Science and Master of Arts degree, and he went on to build a meaningful career that spanned the globe. He will be remembered not only as a great scientist but also as a great mentor and friend.

This article is part of the collection entitled: UNT Scholarly Works and was provided by University of North Texas to UNT Digital Library, a digital repository hosted by the UNT Libraries. It has been viewed 22 times, with 22 in the last month. More information about this article can be viewed below.

The article is a memorial to Wesley J. Thompson (1947-2019) and highlights his contributions to the studies of neuromuscular synapses and glial cells. Thompson graduated from North Texas State University (now University of North Texas) with Bachelor of Science and Master of Arts degree, and he went on to build a meaningful career that spanned the globe. He will be remembered not only as a great scientist but also as a great mentor and friend.

Abstract: Wesley Jay (Wes) Thompson, known for his seminal contributions to the studies of neuromuscular synapses and glial cells, passed away on March 26, 2019, at the age of 71. Surviving family, friends, trainees, colleagues, and others who hold Wes in fond memory gathered at the campus of Texas A&M University in College Station, TX, for a memorial service in his honor some weeks later. All of the speakers recounted with fondness their interactions with Wes that exemplified the impact his approaches to life and work had on the lives of many others. Most who knew Wes would agree that he never liked to talk about himself much except in performing self-deprecating humor and voicing his displeasure with the current political climate. Wes abhorred any public recognition of his accomplishments (or good deeds) and only begrudgingly tolerated those accompanied by research funds. We are certain Wes would have protested the production of this article that pays him tribute. There are aspects of his life, however, that were readily apparent to those who have spent any meaningful amount of time with Wes—his generosity, drive and integrity as a scientist, affinity for history and simpler things in life such as his vegetable garden and backyard barbeque with friends that brought him joy, and love for his daughter. Jeff Lichtman, a fellow towering contemporary figure in the study of neuromuscular synapses, once called Wes “a gem of a human being,” a much-deserved compliment that sweetly sums up the warm character of the man we all knew.

Wes was born on December 10, 1947, in Alice, TX, to Jay and Harriett Thompson from whom Wes inherited many of his endearing traits: rough-around-the-edges Texan charm, a desire/willingness to fix any mechanical instruments (often with mixed results) from his inventor/oilman father, and a deep belief in the value of education from his mother, a school teacher. The family relocated to Crawford, TX, where Wes spent a large part of his childhood. In 1966, Wes graduated from Crawford High School, and in 1970, earned a Bachelor of Science degree with High Honors from North Texas State University (since renamed the University of North Texas), a short 2-h drive away. Perhaps as a preview of what lay ahead in his long and respected scientific career punctuated with honors, a survey of his high school and college yearbooks provides hints that fellow students had already recognized Wes's academic accomplishments and potential. As his career progressed, clearly, Wes did not fall victim to enemies of promise. In addition to receiving several postdoctoral fellowships, he was named a Searle Scholar in 1981 (Searle Scholars Program, Chicago Community Trust) and received a National Institutes of Health (NIH) Research Career Development Award in 1984 and a Javits Neuroscience Investigator award in 2001. He maintained a research program that was continuously funded by the NIH until his death. As a testament to his long-standing dedication to educate undergraduate students, Wes was also recognized with a University of Texas at Austin Teaching Excellence Award in 2000.

Materials from the UNT community's research, creative, and scholarly activities and UNT's Open Access Repository. Access to some items in this collection may be restricted.