Reseach AricleOpen Access
An Acoustical Analysis of the Frequency-Attenuation Response of Musician
Earplugs
Kris Chesky1,* and Amyn M Amlani2
1College of Music, University of North Texas, Denton, Texas, USA
2Department of Speech and Hearing Sciences, University of North Texas, Denton, Texas, USA
*Corresponding author: Kris Chesky, College of Music, University of North Texas, USA, Tel: 940 565-4126; E-mail: Kris.chesky@unt.edu
Received: August 23, 2014; Accepted: January 14, 2015; Published: January 16, 2015
Copyright: 2015 Chesky K, et al. This is an open-access article distributed under the terms of the Creative Commons Attribution License, which permits unrestricted
use, distribution, and reproduction in any medium, provided the original author and source are credited.
Abstract
Musician earplugs (MEP) are intended to reduce the risk for noise induced hearing loss among musician
populations while providing flat attenuation characteristics. However, survey data suggest that low use rates among
musicians are associated with negative listening experiences due to perceived alterations in the spectral
characteristics of music. These shortcomings warrant the assessment of how a MEP processes the full frequency
and complex spectral nuances of musical sounds. The goal of this study was to assess the influence of musician
earplugs on musical stimuli using an acoustic test fixture in order to characterize objectively the influence of custom-
and non-custom-fit MEPs on both the attenuation levels and the spectral characteristics of music in and over a wide
range of intensity levels in a simulated human ear canal. Our objective measurements inside ear of KEMAR confirm
that the spectral characteristics of music are altered by MEPs, regardless of whether the earplug was a non-custom
or custom earplug. The findings suggest that the claims used to market MEPs to musicians and music schools are
misleading and that the discrepancies for claiming attenuation characteristics in response to musical stimuli are
related, in part, to the use of the REAT testing procedure. New testing protocols are recommended.

Keywords: Musician; Musician earplug; Noise-induced Hearing
Loss (NIHL); Real-Ear at Threshold Attenuation (REAT)
Introduction
Student musicians, music teachers, and music professionals
engaged in ensemble-based activities are potentially at-risk for noise-
induced hearing loss (NIHL). The risk stems from these routine
activities occurring at sound pressure levels (SPLs) that exceed the
permissible exposure limits (PELs) established by the National
Institute for Occupational Safety and Health [1]. While neither the
OSHA (Occupational Safety and Health Administration) nor NIOSH
have yet to develop a hearing conservation standard specifically for
such music-related activities, Etymotic Research developed a custom
fit earplug trademarked as Musicians Earplugs [2]. The musician
earplug (MEP) is designed with a pre-fabricated filter that couples to
the lateral-end of a custom-made mold having a bore. The filter is sold
with three levels of attenuation (9-, 15-, and 25-dB), and marketed by
Etymotic Research as ER-9, ER-15, and ER-25, and by Weston as the
ES49 Custom Fit Hearing Protector. These earplugs are marketed to
audiologists and musicians with the special claim that these earplugs
reproduce sound as it is normally heard, but at a lower intensity,
preserving the tonal balance of music [3].
To circumvent the high costs associated with adopting the custom
MEP, a non-custom ready-fit version of this product was jointly
developed and patented by Etymotic Research and the Aearo
Corporation [4]. These non-custom-fit MEPs are labeled and sold by
Etymotic Research as ETY-Plugs and the ER-20 High Fidelity Hearing
Protector. An online search further revealed that this same product is
marketed to musicians directly as the HEAROS High Fidelity
Earplugs, the WestStar Earplugs ER 20, the Fender Touring Earplugs,
and the Vic Firth VICEARPLUG. Further, the non-custom-fit MEP is

marketed directly to public school music programs [5] through a
national marketing campaign called Adopt-a-Band [6]. The non-
custom-fit version, like their custom-fit counterparts, is marketed with
the special claims that these products "replicate the natural response of
the ear canal so that when sound enters the earplug, it is reproduced
unchanged, exactly as the ear would hear it, only quieter" [7].
A literature review examining these special claims suggests that
musicians rate the use of these products negatively [8-12]. In addition
to problems with pressure, pain, and discomfort, musicians report
low-usage rates of MEPs due to interference with playing ability,
distortion of timbre, sonority, and dynamics of the music they and
others are playing. Musicians also report difficulty monitoring their
own playing, that the custom-fit MEPs are not better than pre-formed,
and that the problems created by wearing these products are worse
than the fears of hearing loss. Another concern is that musicians
perform differently when using MEPs due to the pronounced effect on
both the sound level and the spectral characteristics of the musical
output of performing musicians [13].
The disparity between the special claims and what musicians report,
we conjecture, stem from the possibility that MEPs do not reduce
music equally across the frequency range, provide adequate
attenuation, or both. Currently, the data used to support the validity of
the special claims are predicated on the Real-Ear Attenuation at
Threshold (REAT) test procedure (ANSI S12.6-1997) [14], a subjective
method of determining the attenuation of a hearing protector by
subtracting the open-ear hearing threshold from the occluded ear
threshold. Historically, the REAT was designed to provide estimates
obtained by listeners with normal-hearing sensitivity in a laboratory
setting, based on subjective unoccluded and occluded hearing
thresholds of non-musician subjects at octave frequencies ranging
between 125 and 8000 Hz. To date, there is insufficient evidence that 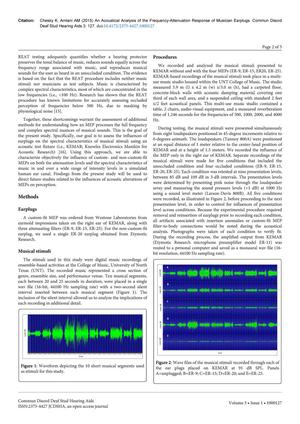 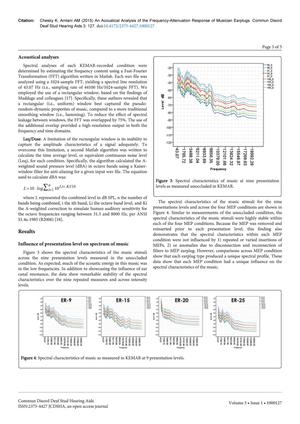 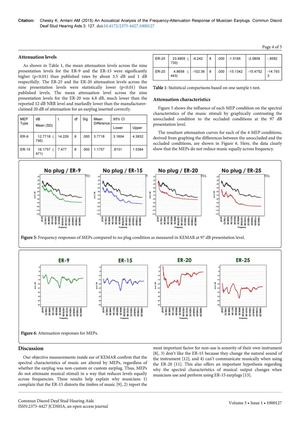 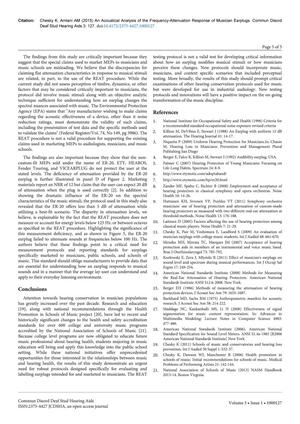