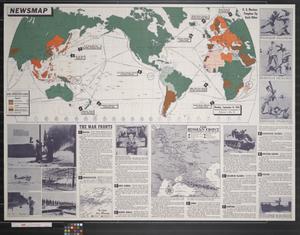 Includes photographs: The flag goes up, Marine bombers take off, Badly damged hangar, Inspecting a Flying Fortress at Malta, Memorial services for those killed during the Battle of Midway, Business end of Pom-Pom, Catafighter, U.S. Marines toughen up each other.

Back:
Maps Are Not True For All Purposes. 15 illustrations are accompanied by text describing some of the methods used to represent the world on a two-dimensional surface.